In today’s post, we set our focus on the Kuki family’s name and it’s background story. The kanji (Chinese written characters) in their name is “九鬼”, which few locations in Japan and different branches of martial systems with certain relations also share in their titles1. Primarily read as “kuki”, the general translation of this is “9 Demons”. However, statements from the Kuki family, who are the main stem for the aforementioned name, claim that the original pronunciation of this was not only “kukami”, but that the 2nd kanji in the name was actually a slightly altered version with a different meaning. A topic I’ve been invested in for some time, I will share some of my findings in relations to this from 2 viewpoints. This post will cover the 1st viewpoint, which looks at that one kanji in question, covering abit of its history and ties to religious matters. 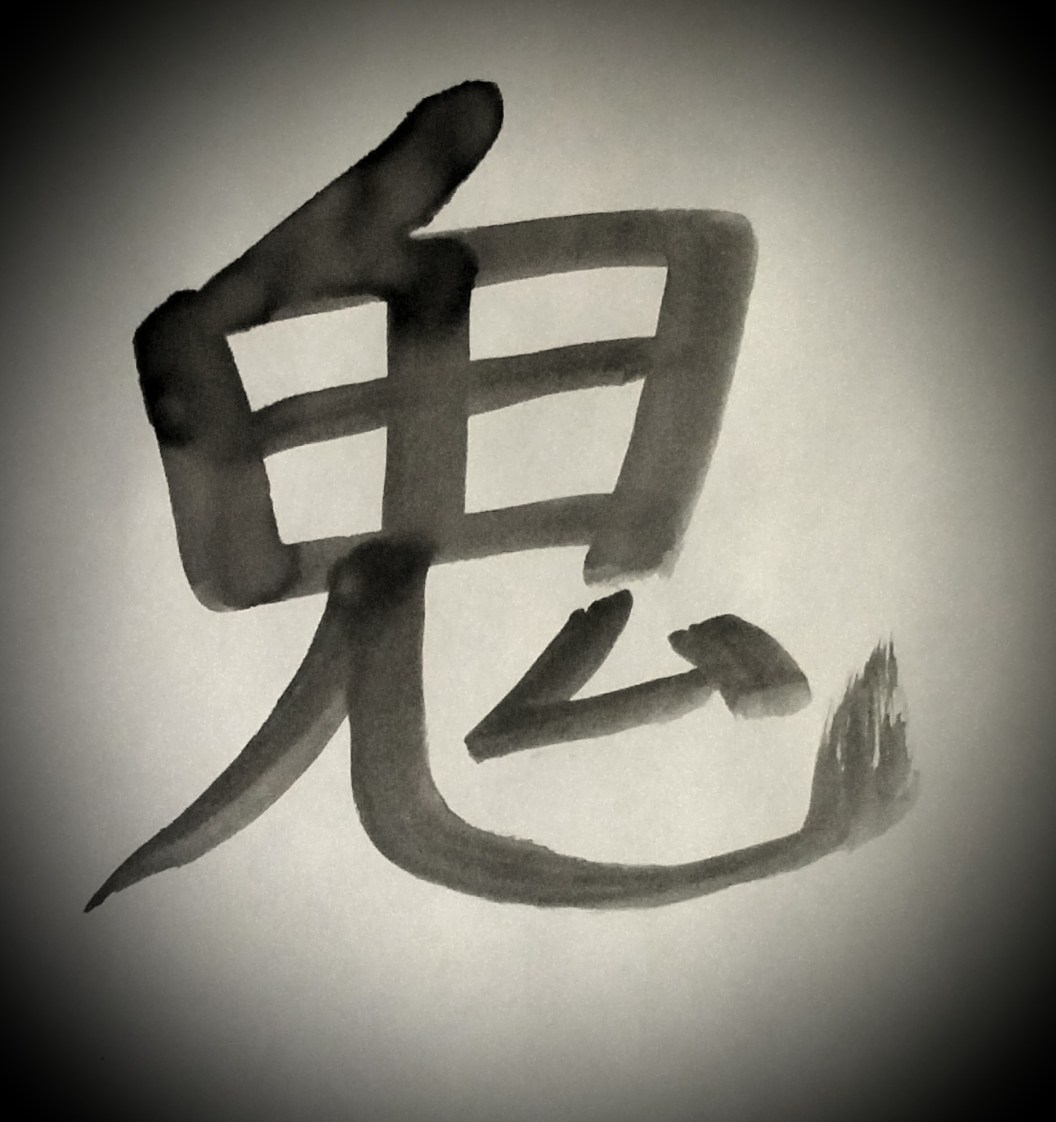 A hand painting of the oni (demon) kanji. Notice the small line on top of this kanji. This line is often viewed as the “horn” (tsuno in Japanese). By Yoko A.

LOOKING AT THE ONI KANJI

In the Chinese and Japanese language, there were periods where a specific kanji had a few different ways to be written depending on usage, which in those cases gave it an altered meaning. The kanji “鬼“ is no different. Normally pronounced as “oni” or “ki”2 in Japanese, it generally possesses the following meanings: demon, (evil) spirit, ghost, fierce, violent, dead body, and death. As expected, this has a negative, demonic connotation. Normally, images associated with the oni kanji in ancient times (whether on its own or in conjunction with other kanji) is ominous, frightful, and/or dreadful. Especially in ancient times of Japan, where superstitions and stories of demons had a big impact on the culture. The general image of an oni in Japan is a being with a large frame, skin that is dark red or dark blue toned, unkempt hair, wearing tiger skin loincloth, talons for fingernails, a large mouth with 2 fangs protruding out, and 1~2 horns on the head. While in popular children’s tales of old, such as “Momotaro”, the depiction of the oni may appear whimsical, the features remain the same, and the overall negative undertone of the oni persists. With such an ominous makeup, would the Kuki family, devoted followers of the religion Nakatomi Shinto, want their name associated with a word that would demonify them?

In the folklore “Momotaro”, the hero Momotaro, along with his 3 animal companions, head to Onigashima to quell the oni (demons) there. Nowadays it is not unusual for the oni (far left) to look somewhat “cute” in children’s tales.

Two pictures featuring oni characters. Click on each one for more info.

In various publications and mediums, the Kuki family and associates of them have expressed many times that the Kuki name was not originally read as it is commonly so now. From their public website “Kuki-shinden” (which is no longer available), to the most recent published book under their authorization called “Shinden Bujutsu” (written by Takatsuka Eichoku), it has been explained that the correct pronunciation is “Kukami”, which actually means “9 Gods”. This is due in part that the oni kanji wasn’t used in their name in conception, but instead another version of this kanji. This kanji is often dubbed “tsuno ga nai oni”3, or the hornless demon.

The “tsuno ga nai oni ” kanji has its history begin first in China, with use primarily by religious sects and groups. With usage mainly in religious practices, it is rarely seen in standard writings or general use, thus quite uncommon even in the general public. The same with Japan as this kanji made its way to this island country possibly through the spread of Buddhism. In Japanese, this kanji has a few pronunciations4 which includes “ki” and “kami”. The meaning of this kanji is stated4 as “onigami”, which is a combination of oni (demon) and kami (god)5. Take note of this meaning, for it is a special terminology that has a deep and unique implication of its usage, which some light will be shed on through the following story below. 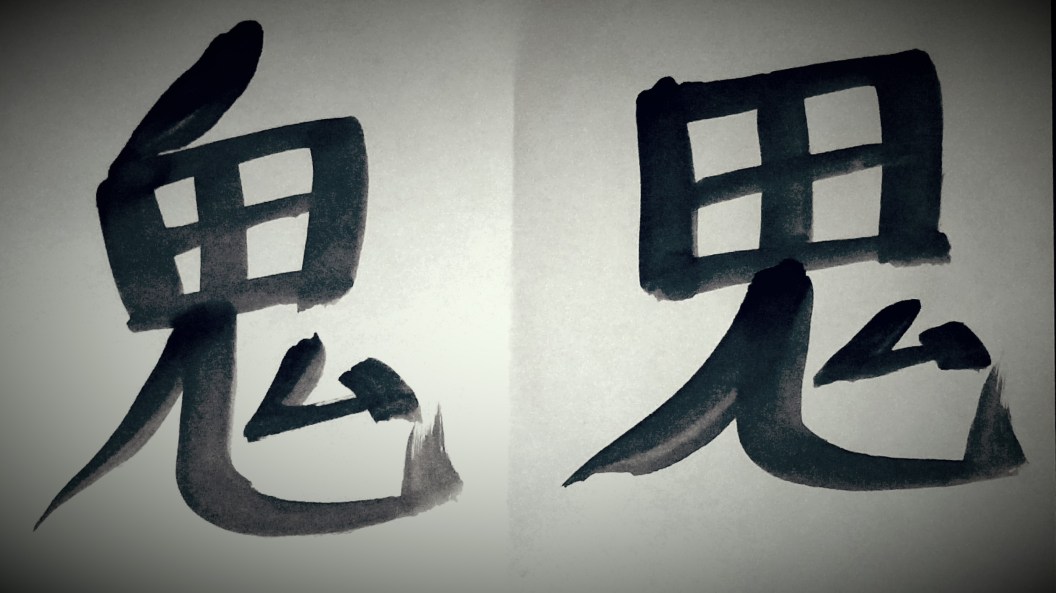 A hand painting of both the oni kanji (left), and “kami” kanji (right). By Yoko A.

As mentioned above, the oni kanji has a small line on top that is viewed as a horn. Well, with that small line removed, this oni is now “dehorned”, and the threat is gone. What we now have is a divine being on the side of good despite retaining its demonic looks.  This seems to be what the term “onigami” entails. There is an interesting tale that further supports this notion, as the “tsuno ga nai oni” kanji often compared to an old story called Kishi Mojin6. 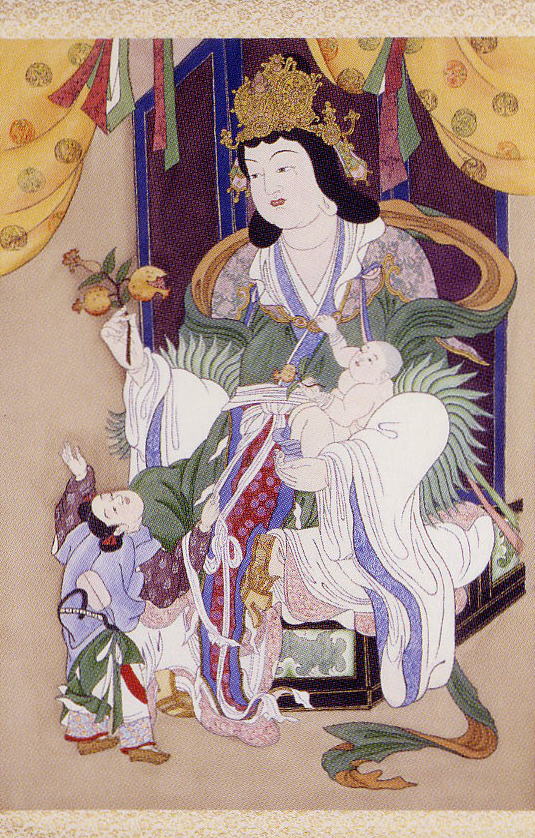 An artwork of Kishi Mojin. From Sacchin san’s website on Buddhist figures and stories here .

Within Buddhist lore7 in Japan, Kishi Mojin is a tale about a raksasi (a female mythological demon) who goes by the name of Kariteimo8 (Hariti Ma in Sanskrit). Kariteimo resided in Rajgir9, at the same time when the Guatama Buddha known as Shakyamuni was living there. Being the wife of Pancika10, they beared hundreds of children together. To feed her children, Kariteimo would capture humans (primarily human children)  and feed to her children their flesh. Many parents, particularly mothers, lamented to Buddha to save them from this ordeal.

Heeding their pleas, Shakyamuni made a plan to not only to bring salvation to the human race, but to also save Kariteimo in the process. For this, Shakyamuni hid Ainuru, her youngest and most dearest of her children. When she discovered her child was missing, the wife searched around the world for many days half-crazed. With no luck tracking her child, she sought help and guidance from Shakyamuni. When approached by this matter, Shakyamuni asked her if she could compare the lost of one of her hundreds of kids to the hundreds of mothers who lost all their kids due to her savage habits. In response, Kariteimo agreed that their loss is much greater than hers.

Now that she understood the pains of others due experiencing the pain of losing her own child, Kariteimo devoted herself to the ways of Buddhism, through the direction of Shakyamuni, and vowed to protect children. She became enlightened11, and, as a guardian deity of Buddhism, is a patron that represents ease of child birth, safety of children, and mercy & happiness.

A hand painting of Kishi Mojin. This is the correct way it is written, but cannot be done so in computers and other electronic devices. By Yoko A.

There are various shrines and temples in Japan that honor Kariteimo and the story of Kishi Mojin. There, you will usually see artworks and statues of Kariteimo that depict her as having a womanly appearance dressed in fine robes and holding a child. Despite being a raksasi, sometimes she is depicted as not having horns12. What is also important to note is that in signs and writings of the word Kishi Mojin outside of typed text uses the “tsuno ga nai oni” kanji. This is important to remember, and directly relates to the Kuki family’s claims regarding the correct writing of their name.

This concludes the 1st part on the Kuki family’s name. Stay tuned for the 2nd part, which will focus on the Kuki clan’s definition of their name along with the unintentional change to as we know it now. Also, the reasoning behind the use of “tsuno ga nai oni” kanji outside of electronic devices will be covered as well.

1) Some martial arts systems having a form of relation to the Kuki family bearing the “Kuki” name are the following:

2) One of the main reasons for a kanji to have numerous pronunciations in Japan is based on if it is used based on Onyomi (音読み, China-originated reading) or Kunyomi (訓読み, Japanese reading). For examples, words that are directly borrowed from, or influenced by the manner of literacy of China, are pronounce with a Chinese-influenced phonetic (Onyomi), whereas others that are developed and used in accordance to Japanese standards are pronounced under Japanese phonetics (Kunyomi). Depending on    if the Onyomi or Kunyomi of a kanji is used can change the meaning of a word.

In the case of the demon character, “ki” is onyomi, and “oni” is kunyomi.

4) Based on proclamation by religious groups in Japan, including the Kuki family.

5) The term onigami is written as 鬼神, with “kami” (神, gami in its conjugated form) meaning (but not limited to) the following: god, deity, divine, spirit, and amazing.

7)  There are, like many stories of old, different versions of the Kishi Mojin story. The roots of this tale is Hindu, and was later adapted by other countries and religions, with changes made to fit with the culture of those countries. Even in Japan there are several varying points concerning this story depending on if told from the viewpoint of Nichiren Buddhism or Shingon Buddhism. For example, in a particular version Kariteimo is not married to Pancika, while in another she is assisted by Ten Raksasi Women (Ju Rasetsunyo十羅刹女 in  Japanese) in capturing human children.

9) A city in Nalanda district of Bihar, in the eastern part of India.

8) Also referred to as Karitei (Hariti in Sanskrit) depending on the Buddhist sect.

10) Pancika is a rakshasa (male mythological demon) who was one of the 8 commanders in the yaksha army of the deity Vaisravana (Bishamonten in Japanese).

11) This process of enlightenment is called “Bohdi”.

One thought on “Kuki Archives: Deciphering the Name ~Part 1~”